"Murder Me Always"- still slaying after all of these years

Hard to believe that my play "Murder Me Always" is 18 years old now. It has come a long way since it poured out onto the page from my imagination. It's old enough to vote now. They grow up so fast.

Kearney Community Theatre in Kearney Nebraska, will present "Murder Me Always" in their 2013 Benefit Gala on Saturday, January 26, 2013 at 8:00PM - location is 83 Plaza Boulevard, Kearney, Nebraska.
Doors will open at 7:00 PM for hors d’oeuvres and refreshments. Pre-show and intermission music provided by Thalken, Tesdall and Thalken.

Theatre League of Clifton will also present “Murder Me Always” as their Fifth Annual Murder Mystery dinner theater at Mario’s Restaurant in Clifton, NJ on March 1, 2, 3, 8, 9, and 10, Friday & Saturday at 8PM and Sunday at 4PM.
Clifton Theatre's annual dinner theater helps to support TLC’s ongoing mission to bring the performing arts to the greater Clifton community. 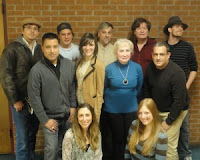