A look back on a handful of productions of Play Dead comedy mysteries presented across the globe.

The year started off with the premier of my new play called "Last Call At Chez Mort" by my home group Affton Center Stage. Set in the 1940's at European style Supper Club "Chez Mort". It recounts the tale of an unusual crime in the Swing Era time.

Later the same year, "Last Call At Chez Mort" was produced by my old friends at FACT Players in Freedom, Wisconsin. / Vacaville Gaslighters in Vacaville, California and then it traveled way down south to the Hotel Magnolia, Casco Viejo, Panama city, Panama.

The Panama production was directed by Gerry Roy, who at one time owned his own theatre in Montreal and has acted and directed professionally and took on the role of the nervous french master of ceremony, Jeal-Paul Truffaut. The production also featured the wonderful acting/singing talents of Claritza Basabe-Corvaia.

"Murder Me Always" once again made the rounds this year,(which was my first penned and most popular comedy murder mystery) - it kicked off March of 2012 by the Thunderbolt Players, a troupe of student actors at Evansville’s New Tech Institute.

"Murder Me Always" also made a trip up to Canada in November to Carlton Place Ontario and was presented by the Mississippi MUDDS in the Town Hall of Carlton Place in partnership with Ballygiblin's restaurant.

Saltshaker Theatre took "Murder Me Always" on a tour in October to various restaurants around Carmel and Salinas California giving dinners some laughs and mystery along with their entrees.

Speaking of dinner and murder, 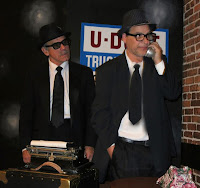 Marin Murder Mysteries hosted the comedy "Remains To Be Seen" in the Spring of 2012 at San Rafael Joe's over a 5 course dinner. The production was directed by Adrianne Goff who also appeared as the lovely and talentless character "Edie Buffet".

"Remains To Be Seen" also made another stop in California, in November at River Valley High School Drama in Yuba City.

Closer to home, (my home I should say, well.. O.K. about 2 hours away) down into the magnificent Ozark mountain region of southern Missouri to Camdenton High School for a production of "I'm Getting Murdered In The Morning" in March. I had a chance to visit the school and the production. It's always a treat for me to see the production and meet the actors, of course, it's not always a treat for the actors to know I am in the audience. If they don't all ready have performance jitters, knowing the playwright is in the crowd can send some over the edge.
"Getting Murdered In The Morning" was also produced by Rural Area Theater in Madison, Florida in June. I did not give the actors a double case of nerves by visiting this production, so I made up for it when my home town of Wentzville Missouri staged a production of "Some Show (about a murder") in November, and yes I did go to this one. I'm not so certain I caused the actors much grief, if I did, they exacted revenge by seating me at a table 1 foot from the stage. They also announced to the public who I was and where I was sitting. If they didn't enjoy the play, well, here was the person responsible for writing it.

"Death Of A Doornail", another one of my popular scripts also made the rounds. In October and November it appeared in Dalton Georgia by Dalton Little Theatre.
And earlier in August, "Death of a Doornail" made an appearance at Murdoch Theatre Company in Perth, Western Australia.

Playwright Toby Otero who came on board play-dead this year had his script The Science Of Murder produced in November and December by Mission: Improv in East Wenatchee, Washington as well as a premier in hometown of West Monroe, Louisiana. His new play called "MURD-ARRR!!!" - a pirate play will be here in 2013!

Again this was just a handful of productions, there were many many more productions all over the place. It's incredible to look back and see where all these plays have played. Pieces of my imagination, put down on paper and then go out into the world to be given life by talented actors all over the world. I am grateful to all of them.

For the new year I am developing a new murder mystery set in the 1890's, a western themed comedy called "Murder In Meridosa", that will take the stage in March. Where will it end up in the coming year? Here's to all your imaginations, works, words,music,visions,crafts and stories. May they travel far for you.