Writing Rules. How annoying is that?

I find that talking about the craft of writing can be a bit annoying. I should say, "to me" it can be annoying. Why? Well, because I truly believe that for each individual writer the method, process and execution is subjective.

What I really find annoying is other writers who firmly believe there is only one way to do it and they will teach you how! Oh boy! Really? I see posts from writers all over the internet with claims such as:

"The 5 things you must know about writing good characters"

"The 10 essential things every good story must have"

Sure, they may think they are being inspirational or even empowering, but really they are annoying. They fill me with wonder. First, I wonder why these writers are sitting around compiling lists of handy dandy tips and not actually writing? Why are they all up in our face with lists instead of working on their story, novel or play? Secondly, haven't they heard the old adage, "Those who can't Do, Teach"?

Yes, I realize that there are essential facts each new writer must know and understand, but I also know that it's essential for a writer to find his or her own voice and attempt to be original. As Judy Garland once said:

When I decided to write a short play for the first time, I did just that - I wrote a one act play. I did not immerse myself in "10 Cool Things Every First Time Playwright Must know Before Writing a One Act", no I just did it. I am not saying every new writer should get all "Nike" and "Just Do it" , I'm just saying that's the approach I took. (read: subjective) * I should also point out that I had quite a few years of experience as a stage actor and had a pretty good understanding about the structure of plays, so you could say I became a playwright through osmosis.

My point is this - if every writer followed all the methods proposed by every other writer, you know - the 5 things you must know about this and 10 things you must do about that, then we would all be writing in the same style. 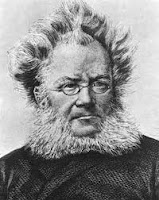 But the fact of the matter is that Hemingway's style was not like Steinbeck or Fitzgerald. Neil Simon style is a tad different than Ibsen or Mamet.

Take for instance the French film maker Jean-Luc Godard. Take a look at his film "À bout de souffle" or as we Americans say "Breathless". This landmark French New Wave film caused quite a stir in 1960. Why? Well, the rules of film making went right out the window. Godard made use of "jump cuts" - instead of smooth linear scene of two people talking, we witness a virtual ADD event.

Jean-Paul Belmondo is standing as he speaks, suddenly he's sitting, then standing. Jean Seberg is riding in a car, her position and the background abruptly change over and over. Why did Godard do this? Because he could. The cinematic rule about continuity in a scene was broken. Godard knew it. He was well versed in all things Cinema. He was well aware of the rules - you must do this and you can't do that - and he said, So What?

When I began writing Murder Mystery plays, I was aware of the formulas of that genre. I also aware those formulas had been done to death. (no pun intended, well maybe a little) I set out to shake up the traditional must dos and should nots of Murder Mystery plays. I believed the only way to find my own voice and create my own style was to run as far away from "tradition" as possible. Sure, some would say to me, "but you don't have a red herring here and no real foreshadow there" and like Godard, I said, "So what?"

My advice is simply this, yes, be aware of the rules, how people write, what methods are out there, structure, plot, character etc.. and then throw them all away and just write. You can read the inspirational tweets and must do lists, but realize they are the thoughts, ideas and practices of someone else who probably learned them from someone else. If it's a really hot day outside and little Suzie from next door sets up a Lemonade stand out front, yea, that's a good idea. Should you then follow her idea and set up your own Lemonade stand next to Suzie? Or should you shake it up a tad and offer Kool-Aid? Really, it's whatever you want to do. It's subjective.
Posted by Lee Mueller at Saturday, January 29, 2011

No wait, you don't need my list. You can figure it all out on your own :-)