Thought I would re-post this piece since we have had nothing but snow day after snow day here in the Midwest.  This was originally posted in 2011.


It was a major coincidence that January 10th was a Snow Day here in St. Louis and I launched a New Play called "The Snow Day Monologues". No really it was. 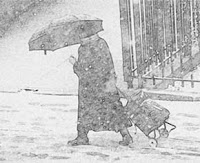 I had been working on this One Act play for a few months now. I had been thinking the excitement I underwent as kid upon learning my school was "closed" due to "snow" and the different stages of emotions I would experience such as: joy, boredom, intrigue, cabin fever, delusions of grandeur and finally exhaustion.

I began writing from the point of view of a few characters who are stuck at home on a snow day and explored their individual thoughts as short monologues in a one-act structure. The characters eventually grew into six separate individuals; three boys and three girls and what they did to pass the time. Some would face issues or problems they had at school, others would fight boredom and try to entertain themselves and while others would use the time to reflect. There is nothing like being stuck in a confined space for a long period of time to activate the imagination.

I also wanted to create a funny yet insightful piece for young actors to interpret and explore. I've read enough grade school/high school scripts to realize there was a place for something a bit different. Many of my original Murder Mystery scripts are very popular with High School groups so why not create something funny and relevant they could relate to - that wasn't in the Murder Mystery genre?

Also instead of the standard "monologue" style where one character stands up and speaks at length for a while, why not break that convention up and spread it out? For example, as one character begins his or her monologue it then flows into another character who begins and on to another character. A common theme would tie them all together and we could jump around from one monologue to the next and experience each as a whole through various scenes. Perhaps a reflection of ever shortening attention span to which we humans are growing accustomed. Yea, anyway, I have to go shovel the driveway now.

Check out a short sample to play HERE
Posted by Lee Mueller at Wednesday, January 12, 2011

I read the sample - wow Lee - you really have a handle on the whole modern teenager experience- I have several of them here at home and that sounds just like them - really great work - great premise - love it!