"To Wake The Dead" for One show in Ashland PA 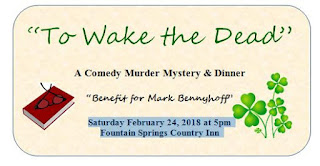 A one-show presentation of “To Wake the Dead” by Lee Mueller, a murder, mystery comedy dinner theater, will be held at 5 p.m. Feb. 24 at Fountain Springs Country Inn  52 Country Club Rd Ashland PA  17921

Plot:   Renown Mystery writer Fred Finnegan has died under unusual circumstances and all his friends have gathered at his wake. Was Fred murdered by someone at the wake? Because he is also there and he's dying to find out.


The performance will be a fundraiser to benefit Mark Bennyhoff, Ashland, who has been diagnosed with ALS.

The presentation is being hosted by his family, friends, and supporters, according to a release. Tickets, at $25 each, will include dinner and the show. There will be a cash bar and live Irish music by The Troubles before the show. Doors will open at 4 p.m. followed by dinner at 5 p.m. and the show at 6:30 p.m. For tickets or more information, call Angela or Beverly Kane at 570-875-4908.