"An Audition For A Murder" in October in Iowa and Wisconsin 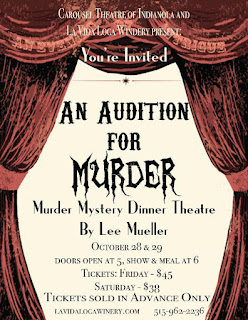 "AN AUDITION FOR A MURDER" will start off October in Waupun Wisconsin October 7th and 8th, presented by the Waupun Community Players on the Waupun City Hall Stage.

So tell us about this Audition show thing. OK  The thing is  (the plot)   A Theatre group is holding auditions for a Murder Mystery called "Death of A Disco Dancer".

All of the typical actors show up to audition. There is Mia Monahan - the militant method actress, Amber Frost- the ditzy Drama queen, Chad - the energetic actor who never seems to get a part in anything, Alan- the accomplished Theatre Major who works at a fast food place in the mean time. Troy May - the ego-centric actor who always gets a role and his gorgeous assistant Tantanya who holds his imported bottled water and carries his Portfolio. And last but not least, Mrs. Needleman and her precious daughter Julie , fresh from the Little Miss Pumpkin Pageant finals.

The auditions get underway without too many problems, well a few.. Well, all right, you see, the thing is.. the Director Vivian Vinderlou and assistant director Reed Moore have a bit of the problem with "script". The problem is they don't have enough copies for everyone. And the bigger problem is they don't actually have a finished script.
Jim Culter- the playwright arrives in the nick of time with a few more copies and a few more finished pages just as one of the actors mysteriously dies. As luck would have it, Jim has brought Inspector Bonnie Brauvera along to the auditions to serve as Technical advisor for the play. Perhaps the investigation into this "mysterious death" will inspire the playwright and help him finish the play. After all, there is a read-through on Monday.

On October 28th and 29th  The Carousel Theatre of Indianola will also present the play at the  La Vida Loca Winery
Doors open at 5:00 with the show to begin at 6:30
Oct 28th Menu $45.00 per personOct 29th Murder Mystery Appetizer Show $38.00 per person

But I don't live anywhere near the upper midwest region. Couldn't I just... I don't know... Read it or something?
Why yes, Yes you can.