"Death Of A Doornail" in Wichita (Sold out) 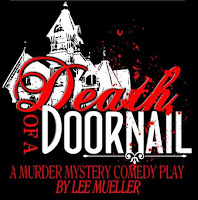 The comedy murder mystery, "Death Of A Doornail" by Lee Mueller will play the Wichita Theatre at 6:30 p.m. Jan. 23 and Jan. 30, located at 10th and Indiana in Wichita Kansas.
Plot:
Eccentric millionaire Albert Doornale has invited his close friends to his estate, including his ex-wife Abigail, his fiancée Candy Bombay and his childhood friend from the lower East Side, Salvatore Carbone. Everyone arrives at the estate greeted by the grumpy butler and cutlery-carrying cook. The only problem is, Albert is not there,. $35, includes dinner. 723-9037 or wichitatheatre.com.
As of this writing both performances have sold out.


When the Wichita Theatre announced that its new dinner theater series would debut with the over-the-top, audience-participation murder mystery "Death of a Doornail," producers knew the response would be good.
"We just didn't know it would be this good," director Spencer Williams said. The theater sold out all 75 tickets for each of the shows Jan. 23 and 30 (at $35 a ticket) in three days.
"Death of a Doornail" drew both singing and nonsinging actors, Marshall said. "It's a comedy, and it's very funny. Our actors are pretty much hams. They love stepping out of the bounds of script, and this gives them the opportunity to be as funny as they want to be."
American playwright Lee Mueller's 1998 "Death of a Doornail" begins with wealthy Albert Doornale missing, and his over-the-top guests may have had something to do with it.
"The characters and the setup are traditional; the events that happen are not," Williams said. "There are definitely lots of laughs."
Posted by Lee Mueller at Friday, January 15, 2016