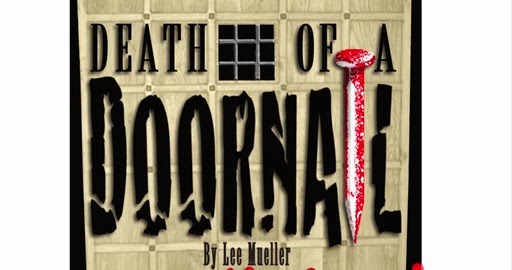 DEATH OF A DOORNAIL has been playing around the country quite a bit in the last few months. It played in February in Mansfield Ohio at the Ohio State Reformatory - which was seen on Ghost Hunters and also the prison used in The Shawshank Redemption ,  Doornail also just finished up this last weekend at Hoogland Center for the Arts in Springfield Illinois,

And now it makes it way back to St. Louis were it was originally staged back in the late 90's by Affton Centerstage. This new production is directed by Michelle Zielinski

Eccentric Millionaire Albert Doornale has invited all of his close friends to his estate including ex-wife Abigail, fiancé’ Candy and childhood friend Salvatore. Everyone arrives at the estate greeted by his grumpy butler and cook, but Albert is not there. His spoiled daughter and nerdy nephew know only that blood has been discovered in an upstairs bathroom. Was Albert killed and carried away? Inspector Bukowski arrives to investigate…….