Hold the presses. OK yea, presses are a bit heavy...so just set them down in the corner over there.

"I'm Getting Murdered In The Morning" is being performed at 3 locations.

Per my good friends in Ohio I received this announcement: "Liberty Center Drama Department cordially invites you to the wedding of the month as Brenda and Eddie (the popular steady) are getting married....and mayhem abounds!
I had the great pleasure to visit Liberty Center Ohio last year around this time when they were in rehearsals for my play "Murder Me Always". I realize for student actors it's always a little surreal to have the person who wrote the lines you are speaking on the stage to be sitting there watching you. I have been in similar situations where the playwright sat in on rehearsals and watched as I interpreted his dialogue, trying to convey (hopefully) what he meant. I must say, most of the playwrights I have met were pretty laid back and didn't furiously take notes or scream that it was all wrong!!! Many writers, including myself have an understanding that once their ideas/words fill a page, they are gone. What we had envisioned will very rarely sound and look exactly as we imagined once it is interpreted by someone else.
I always believed if we as writers do our job correctly, directors and actors will realize the scope of any character we created. The will understand the emotion and tempo of a scene and if we are fortunate, actors will pick up the slightest nuances we etched into our words.

Of course, with Murder Mystery Comedies, most of the characters are painted in very broad strokes. I do not mind if an actor takes a character and runs in a new direction with it. Sure, it may not be what I originally imagined but it may be better than I would have thought. Much in the same way a music composer may be delighted at a jazz interpretation of his simple tune. (Tea for Two by Oscar Peterson and Lester Young for example.)

An old favorite quote of mine is "Art is the process not the product" and that holds true for many playwrights. Our art is in the process of writing - creating characters who speak and interact with each other through conflicts and finally resolve everything at the end. (sometimes)
Once we are done, we have a product called a "play". One the great things about our art is that once it is handed off, it becomes a process (art) all over again for actors. A self renewing art form. 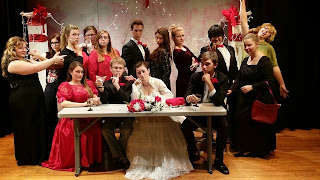 Liberty High School Drama department will be renewing the process of art November 13th through 15th. A close approximation of my imagination will occur at 103 W Young St, Liberty Center, OH 43532. Oh and there will be a cake and punch reception Thursday, Friday, Saturday nights at 7:30 in the Little Theatre, Liberty Center. All tickets are $8.00 and may be purchased at the door.
Posted by Lee Mueller at Wednesday, November 12, 2014