Follow up to my previous post about entering a short script (12 min) into a competition in Hyderabad, Andhra Pradesh India.  Well through social media and Skype I talked to the actors to find out how it was going - and then learned that our play did not make it to the Finals. Oh well....

But apparently that was not the end of the road. The scripts themselves had a second life - yes, some were chosen to be judged simply on writing and were submitted to a category for best Original script.  I received a message from one of the actors in the play, Shashank Karmarkar : 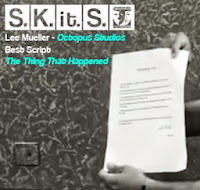 " I just returned from watching the Finals and am writing to tell you that you just WON FOR BEST ORIGINAL SCRIPT!!! Congratulations!! I knew it was a winner when I first read it agreed to do the part!! Apparently, all 22 participating scripts were sent for judging to various writers in Bombay and Bangalore, none of whom actually watched the shows in Hyderabad, so their verdict was unbiased, and based purely on the merit of the scripts!! "

There is a variation of Luke 4:24 (" And he said, Truly I say to you, No prophet is accepted in his own country." ) - that states an artist is never recognized (for talent etc.. ) in his/her own town and must travel away from home to be discovered. E.G. - T.S Eliot, Tennessee Williams, William Burroughs etc.. all had to leave Saint Louis to be recognized for something - OK I am not lumping myself in that crowd, I am just saying that the old twisting of Luke is correct. In this case, I had to go to India.
Posted by Lee Mueller at Friday, September 27, 2013