There are many places I have never traveled to but my words and ideas have. That being my plays. My plays have been produced around the world from Croydon UK, to Nagoya Japan, Ho Chi Minh City, Vietnam, Singapore, Tasmania Australia and now India.

The Torn Curtains theatre group was created on November 15th,1971 in Hyderabad, Andhra Pradesh, India. And some 41 years later, on July 14th they will perform one of my scripts, Murder Me Always.
It will be directed by Mala Pasha who is one of the founding members of the Torn Curtains - one of the oldest English speaking theatre groups in Hyperabad. 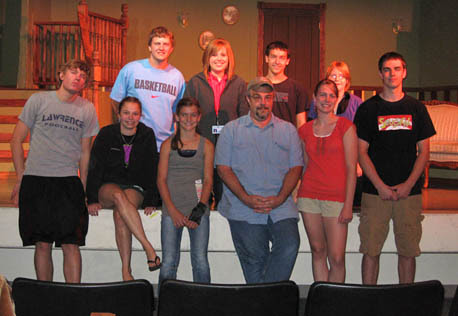 And now onto a place I have physically traveled (along with my words and ideas), and that place is Freedom, Wisconsin. A few years ago I ventured up to visit FACT players under the invitation of director Lindsay Cummings while they were in rehearsals for a great production of "Murder Me Always".
On July 26th and 27th they will present my most recent Murder Mystery (slight musical) comedy, Last Call At Chez Mort.

If you don't happen to be in the Wisconsin area, but instead dwell on the West Coast, then you are in luck! Why? Well, because Vacaville Gaslighters will also be performing "Last Call At Chez Mort" August 17th thru 19th and August 24th thru 26th in Vacaville, California.
No, I have not visited Vacaville, but in a sense, a piece of Vacaville has traveled to me.
Last year the Vacaville Gaslighters picked up numerous theatrical "Arty Awards" for their productions. 2 of the trophies were for their production of my script Death of a Doornail. They were kind enough to send me the award they won for "Best Original Production" in the comedy category.
It's awesome to think that sometimes you send your words and thoughts on paper out into the world and sometimes they will send you a souvenir.