The Galva High School Theater Department will present “Murder Me Always,” a play by Lee Mueller, on March 25-27 at the school.

Galva Illinois which is not too far from a place I spent a whole lot of time as a youth, that being - Galesburg Illinois. Stomping grounds of my Grandparents and birth place of my mother -not to mention Carl Sandburg. Also site of one of the Douglas-Lincoln debates at Knox College and as rumor has it - the city where the Marx Brothers created their infamous nicknames of Groucho, Chico, Harpo, Zeppo and Gummo! Apparently it was during a poker game.

Anyway, the play, details are as follows:

The story line features a wealthy banker and merchant, Mr. Swanwallow, who has invited many prestigious guests to his dinner party to celebrate the birthday of his dear friend, Widow Vanderventer. But not all of the guests were invited – and some of them seem very suspicious. 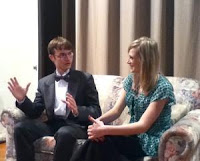 After a guest is suddenly murdered, the remaining dinner guests (and audience) must solve the mystery and find the murderer.

Curtain times are 7 p.m. Friday and Saturday, and 3 p.m. Sunday.

Admission is $5 for adults, $4 for kids. Dessert can be purchased at intermission for a $2 donation.

Also I received some great news from Daniel Ostrander in Nagoya-Shi, Aichi, Japan. Despite the recent events in that country The Nagoya Players planned production of "Murder Me Always" will go on as scheduled. 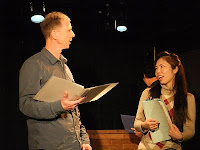 This is indeed a courageous decision of "show must go on". But truly there is nothing like a few hours of light hearted escapism to give your thoughts a rest. I can recall being a part of a comedy sketch/improv group that was scheduled to preform the night after the Challenger shuttle explosion. Although the crowd was sparse and there was a very tense gloomy cloud hanging over everyone's head, the show went on. I know it has been said before, but sometimes Laughther is the best medicine.
Posted by Lee Mueller at Thursday, March 24, 2011