Highlights of the year -the unlist

I think H. Allen Smith (American journalist and humorist) said it best when he said; "The human animal differs from the lesser primates in his passion for lists of 'Ten Best'."

Having said that, I will now list a few major things, highlights if you will, from this past year. (in no particular order, number or letter)

From my catalog of play scripts at Play-dead.com, the most produced scripts this year were I'm Getting Murdered In The Morning", "Murder Me Always" and "Death Of A Doornail".

A few highlights I will mention about these productions are: My wife and I finally formed our own theatre group this year called The Play Set and we produced my own script - "I'm Getting Murdered In The Morning". Keep in mind, I have years experience being "on the stage" as an actor, as well as "off the stage" as a playwright and director, but none of that experience can prepare one for the "front office-producer-business" side of things. Wow. Finding a venue to stage the show and a cheap space to rehearse the show and finding funds to finance the production, a printer for the programs, it was a whole new world. But a great learning experience. We plan to do it again.

a few of my plays are produced outside the United States. This year "Death Of A Doornail" was staged at the historical Manoel Theatre in Valletta, Malta.

What's amazing about this, not only was the show staged in Malta by Coryse Borg, but the "Teatru Manoel" (theatre) was built in 1731.
That gets my vote as the coolest place one my scripts has ever been produced.

Another highlight was the production of "Murder Me Always" by the International Center on Deafness and the Arts at CenterLight Black Box Theatre in Northbrook, IL. What is truly awesome about this production, is that the show was presented using American sign language and spoken English. I am completely honored to have ICOD choose my script.

This past summer, I was invited by a drama teacher at a local High School in my area, Francis Howell Central, to drop in on a rehearsal for my play, "Remains To Be Seen". It's always fun to answer questions about my scripts, what I intended with this "line of dialogue" or who this "character" may be based upon. 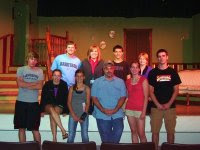 It's also nice to reassure actors that yes, I'm just an ordinary person. (Sometimes) Actually, I would like to visit more places and productions in the next year. I've only been invited a few times so far and I've had a lot of fun doing it. Hint Hint.

I have a plethora of projects slated for 2011. One is a "non-murder mystery" script that I have been working on recently. It's called "The Snow Day Monologues". Essentially, it's a series of scenes of students... you guessed it, stuck at home on School Snow Day. Each scene overlaps between characters so the monologues are broken up into bits but each somewhat tie together. It will be available very soon.

Finally, my biggest project has been a short film I began shooting this fall with some talented local actors. It's called "Criminetly". I had written the script a few years ago and finally found the right people to bring it to life. Most of the scenes have been shot and only a few remain. It was inspired by the New Wave French films of the 60's and noir style "heist" films - I will just say that. I hope to enter it Film Festivals in 2011.

And my biggest highlight - I get to be called Grandpa now.

I know, I don't feel old or mature enough for that title, but with a face like that... who can refuse. Even though all she can say now is "gunk gunk".

Well that's pretty much it. My list of highlights from 2010. Of course, I will post this and probably think of a few more. 1 or 2 things. Or maybe a few A and B things. But that's what happens when one doesn't get all listy with stuff.
Posted by Lee Mueller at Friday, December 31, 2010

Email ThisBlogThis!Share to TwitterShare to FacebookShare to Pinterest
Labels: Death of a Doornail, I'm Getting Murdered in the Morning, Lee Mueller, murder me always, play-dead, Teatru Manoel, theater