What's in Store for Theatre Space

When I first entered the amateur theatre circuit in my local area, oh so many years ago, there were at best 4 or 5 groups in the city. Most of these groups were real "Mickey and Judy" type of community theatre troupes, as in: "Hey kids! Let's put on a show! We can use my Uncle's barn and my grandma can make some swell costumes!" 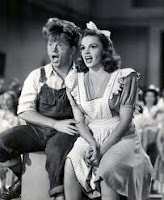 You know, that type of 'gung-ho, grin and show' community theatre.
All these years later, a dozen or more "new" theatre groups have emerged. Many of these new groups border on being classified as semi-professional troupes. That old mom n' pop community theatre spirit is a thing of the past. These new troupes wouldn't be caught dead producing old standards such as "Our Town", "Arsenic and Old Lace", "Blythe Spirit" or any other play that local high schools have long since worn holes in. No sir.
Most local productions now offer up Mamet, Sheppard, Albee, Durang and host of other plays written by contemporary playwrights. This trend is in fact bringing out a new audiences to live theatre as well as veteran audiences who have been numbed by a billion productions of "Bye Bye Birdie" and would love to see a play from this century.

But there's the Rub!

With so many groups springing up, the question of "space" has been an issue. One troupe may run for a season in church space only to loose it the next year. Some theatre troupes bounce from a coffee house to a school to a warehouse but never really planting roots in a given space. It's a tough existence.
At the same time, as a result of the recent economic hiccup, many local shopping malls flirted with the ambiance of "ghost towns". Vacant store after vacant store dotted the once vibrant, climate-controlled consumer landscape.
Somehow, the down trodden "Mall" collective and the Theatre group in search of a home, collided and found common ground. This common ground may have been where once people "Fell Into The Gap" but are now, filing in to see live theatre.
In fact, my own group is leasing a "store" space in a local mall and my new murder mystery play will premiere there. Yes, in the mall. Of course, they don't refer to these spaces as "mall", per se, no, they are "art spaces". Along with a host of live Theatre venues, other spaces feature Art work, pottery, photograph prints from local artists. So, yes it is an "Art Space".
In fact, another mall in a nearby suburb is also allowing Artists and Theatre groups to move into the vacant stores. Perhaps this idea will spread across the country and all the little orphaned theatre troupes will finally have a place to "play".
Mickey and Judy would be proud! Hey kids let's put on a show! We can use my Uncle's Mall!